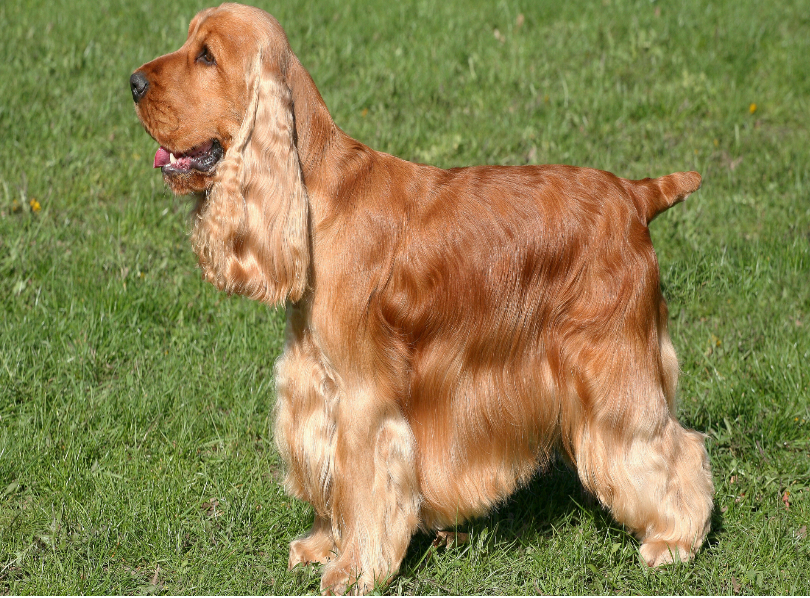 COAT AND COLOR: Silky coat of medium length with feathering on ears, legs, and torso. The coat comes in many solid colors, including black, red, liver, and golden. Markings can be tan or white. Parti-color coats are white with black, liver, or red coloring.

History of the English Cocker Spaniel

The English cocker spaniel descends from a larger group of hunting dogs bred in Britain and beyond reliable and loyal field companions.

Spaniels, whose early origins may date back as far as the 16th century, were particularly prized for their ability to assist with hunting game birds and waterfowl.

Any given litter could produce both cocker spaniels—smaller dogs adept at hunting woodcock birds—and springer spaniels, prized for their ability to cause birds to ‘spring’ out from their hiding places.

Initially, the only differentiation between the two classifications was based on the size of the dog.

In the 1890s, the spaniel family was split in two, recognizing both the cocker spaniel and springer spaniel.

The breeds began to be independently developed and bred. Within the cocker spaniel breed, further differentiation in type became evident.

In the United States, a smaller, slightly blockier, and furrier version of the spaniel came into popularity.

Termed the American cocker spaniel, these dogs stand in contrast to the somewhat larger English spaniel bred with longer legs, a shorter back, and less fur.

In 1935, the split was made official when the AKC granted official recognition to the English cocker spaniel as an independent breed.

Today, this devoted pet remains a popular breed on both sides of the pond.

Even England’s royal family appreciates the nobility of this breed. Prince William and Kate Middleton own an English cocker spaniel named Lupo—bred from a dog owned by her parents.

The English cocker spaniel isn’t a high-maintenance dog breed but does require some special consideration to be a happy, healthy pet.

As part of the sporting group, these dogs have seemingly tireless energy and need an outlet.

Plan to give your English cocker spaniel a lengthy walk each day or take him for a run.

Without adequate exercise, they can become anxious or destructive. While these dogs can keep up with you outside for hours on end, they’re happy to rest and relax inside the home.

They’re eager to please their owners, so training is usually not too tricky with this breed. However, they have a sensitive nature and need plenty of positive reinforcement.

Harsh training methods can cause fear and anxiety. It may contribute to undesirable behaviors like submissive urination or separation anxiety.

If you’re a hunter, these sporting dogs seem to be naturals at their job and understand their role with relative ease.

Aside from daily exercise, regular grooming is likely the most significant investment of time you’ll make in your English cocker spaniel.

The medium-length silky hair that gives these dogs such a beautiful coat can quickly become matted. It also is subject to shedding.

The more you can brush and maintain the coat, the easier it is to control excessive shedding.

To keep the coat looking its best, most owners of English cocker spaniels take their dog to a groomer regularly. The hair around the legs and torso often needs to be trimmed to avoid becoming unruly.

You’ll also need to regularly check your spaniel’s ears for strange odors or excessive wax buildup. Dirt and bacteria can become trapped inside the ear canal, and these dogs are sometimes prone to ear infections as a result.

English cocker spaniels aren’t exempt from the health problems that sometimes plague purebred dogs. For this breed, be on the lookout for the following conditions:

To minimize the probability of having a dog with one or more of these health problems, look for a breeder that can provide precise test results for the Orthopedic hips and knees.

The Foundation for Animals and precise eye results from the Canine Eye Registry Foundation can provide information for each parent dog.

There also is a test for hearing available from the Orthopedic Foundation for Animals that measures brainstem auditory evoked response (BAER) and may be vital if you’re considering a parti-colored English cocker spaniel.

Feed your pup a well-balanced and nutritionally complete dog food for optimal health and well-being. Whether you choose a conventional kibble diet, incorporate wet food, or opt for a raw diet, be alert for indications of an allergic reaction, which plagues some spaniels. If your dog has food allergies or sensitivities, you might opt for a limited-ingredient diet.

Keep a close eye on the weight of your English cocker spaniel. The breed can be prone to obesity if overfed and under-exercised.