Home Blog Keep your Dog away from these TOP 10 POISONS

Home Blog Keep your Dog away from these TOP 10 POISONS

Many of these were caused by substances in your home, substances that may seem perfectly harmless to you.

But just because something is safe for people doesn’t mean it won’t hurt beloved pets. Some of the most dangerous dog poisons are foods and medications we take on a daily basis.

Depending on how a particular substance affects your dog’s body and how much was ingested or inhaled. Pet poison symptoms can include gastrointestinal and neurological problems.

Cardiac and respiratory distress, coma, and even death. Watch out for these top 10 poisons that can threaten the health of your dog.

No. 1: Pet Poison Medications for people

Drugs that might be beneficial, or even life-saving, for people, can have the opposite effect in pets.

Some of the most common and harmful medications that poison dogs include:

You may think you’re doing your dog a favor when you apply products marketed to fight fleas and ticks, but thousands of animals are unintentionally poisoned by these products every year. Problems can occur if dogs accidentally ingest these products or if small dogs receive excessive amounts.

No. 3: Some Pet Poison is in People food

Your canine companion may look so cute as he sits there begging for a bite of your chocolate cake or a chip covered in guacamole, but not giving him what he wants could save his life. Animals have different metabolisms than people. Some foods and beverages that are perfectly safe for people can be dangerous, and sometimes fatal, for dogs. 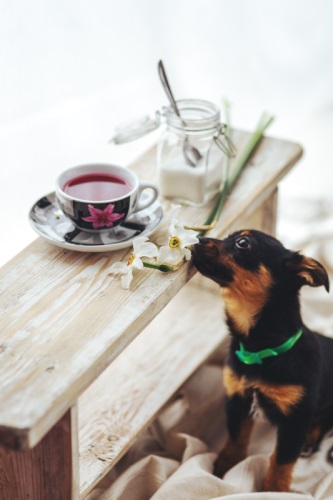 Though not harmful to people, chocolate products contain substances called Methylxanthines that can cause vomiting in small doses, and death if ingested in larger quantities.

Darker chocolate contains more of these dangerous substances than do white or milk chocolate. The amount of chocolate that could result in death depends on the type of chocolate and the size of the dog.

For smaller breeds, just half an ounce of baking chocolate can be fatal, while a larger dog might survive eating 4 to 8 ounces. Coffee and caffeine have similarly dangerous chemicals.

Symptoms of alcohol poisoning in animals are similar to those in people, and may include vomiting, breathing problems, coma and, in severe cases, death.

You might think of them as healthy, but avocados have a substance called persin that can act as a dog poison, causing vomiting and diarrhea.

Dogs may suffer from a series of symptoms, including weakness, overheating, and vomiting, after consumption of macadamia nuts.

Experts aren’t sure why, but these fruits can induce kidney failure in dogs. Even a small number may cause problems in some dogs.

This sweetener is found in many products, including sugar-free gum and candy. It causes a rapid drop in blood sugar, resulting in weakness and seizures. Liver failure also has been reported in some dogs.

No. 4: Rat and mouse pet poison

Rodenticides, if ingested by dogs, can cause severe problems. The symptoms depend on the nature of the poison, and signs may not start for several days after consumption. In some instances, the dog may have eaten the poisoned rodent, and not been directly exposed to the toxin.

Just as we can be sickened or killed by medications intended to help us, cases of pet poisoning by veterinary drugs are not uncommon. Some of the more commonly reported problem medications include painkillers and de-wormers.

They may be pretty, but plants aren’t necessarily pet friendly. Some of the more toxic plants to dogs include:

No. 7: Chemical Hazards is Pet Poison

Not surprisingly, chemicals contained in antifreeze, paint thinner, and chemicals for pools can act as dog poison. The pet poisoning symptoms they may produce include stomach upset, depression, and chemical burns.

Just as cleaners like bleach can poison people, they are also a leading cause of pet poisoning, resulting in stomach and respiratory tract problems.

Lead, which may be in paint, linoleum, and batteries, can be poisonous if eaten by your dog, causing gastrointestinal and neurological problems. Zinc poisoning may occur in dogs that swallow pennies, producing symptoms of weakness from severe anemia.

No. 10: Fertilizer That are Pet Poisoning

Products for your lawn and garden may be poisonous to pets that ingest them.

What to do for suspected dog poisoning

If you think your dog has been poisoned,  act quickly, but rationally.

First, gather up any of the potential poison that remains — this may be helpful to your veterinarian and any outside experts who assist with the case. If your dog has vomited, collect the sample in case your veterinarian needs to see it.

The best way to reduce the chances that your beloved dog will be the victim of pet poisoning is by preventing exposure to dangerous substances.