If you’ve heard that playing tug-of-war can lead to aggression in dogs, you’re not alone. Unlike more innocuous games such as “fetch,” tug-of-war inspires debate within the canine community.

We chatted with Dr. Mary Burch, director of the AKC Family Dog Program and a certified animal behaviorist, to get her professional opinion on the game of tug.

Many people believe that playing tug-of-war leads to aggressive tendencies.

Is there any truth to this?

There was a time when tug games were thought to cause aggression and dominance in dogs. The current thinking is that appropriately manage tug-of-war and similar games; dogs don’t become aggressive.

For example, when a dog snaps the owner’s hand while playing tug-of-war is not the result of the game. But the owner did not effectively set boundaries and teach the dog its rules. 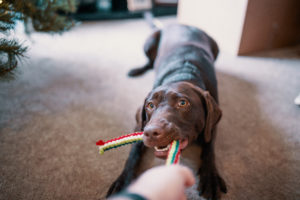 Are there benefits to playing tug-of-war with dogs?

Tug-of-war is an enjoyable game for the dog, and playing it strengthens the bond between the owner and dog. Tug games can build confidence and help the dog use up excess energy.

Games such as tug-of-war provide mental and physical stimulation. They can be used to teach dog self-control.

Often K9 police dogs and canine athletes are rewards with a game of tug. K9 handlers sometimes pay a dog with tug-of-war after the dog completes a certain number of searches. And in sports such as flyball, dogs will enjoy a brief tug game as a reward.

Is tug-of-war a good idea for dogs that may already be aggressive or have resource guarding tendencies?

While tug-of-war is fun, and there can be many benefits related to tug games, as with anything else, there are some situations in which tug-of-war may not be the best activity for a dog.

Dogs that have a history of aggression (toward animals or humans) can often take tug games too seriously. In those cases, there are better options for games. Dogs that are high-arousal dogs that can’t settle down and tend to become over-stimulated are also not the best candidates for tug games.

How can dog owners play tug-of-war in a healthy, safe way?

There are several steps to initiating tug-of-war with your dog in a safe way. You should begin the tug game, and throughout the game, keep in mind that you are in control.

It means if the dog appears to be overstimulated, obsessed, or overly aggressive about grabbing it. You should take charge and end the game.

In a tug-of-war, the dog should always be well trained and under control enough to follow your command to release the toy. Keep in mind that some dogs, when happily playing tug-of-war, will begin to play-growl.

As long as the dog’s tail is wagging, and it is clear that he is playing, the game can continue. If you sense that the dog is so intense that he won’t release the toy, it’s time for a break. 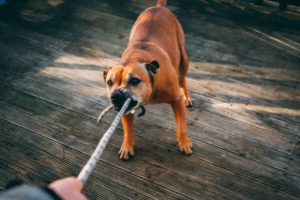 Are there any types of toys you correctly recommend for games of tug? Any toys you would discourage dog owners from using?

Keep in mind that when playing tug-of-war, you want to protect the dog’s mouth and teeth. It means you should not use anything hard or with sharp edges (such as a big stick) when playing tug.

Toys for tug games should be soft, such as a piece of towel tied in a knot, a rope, or commercially made tug toys that are pliable and soft.

Should dog owners be aware of anything else?

One of the most important things to know about tug-of-war is always to let the dog win. If you are playing tug with a puppy, keep in mind their jaws are not fully mature. And that they still have baby teeth. You should only do the very gentle pulling, if any, leave this up to the puppy and keep it short.